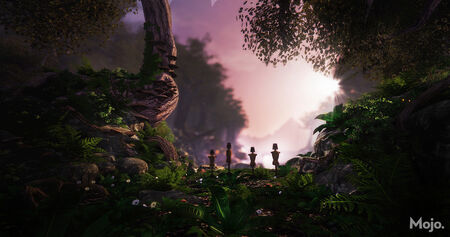 The combat in Aderyn's Cradle is a key component of gameplay.

Aderyn‘s Cradles combat system is built on making sure that player agency is at the heart of gameplay. Your actions should determine what happens in the game, and we want to capture your intent and translate it as seamlessly as possible into the world of the game.

Aderyn's Cradle provides an engaging new type of fast-paced melee-combat that will force you to rely on your wits. The combat system is driven by your intent and purpose, making your skill, not chance, what determines the outcome of battles.

We intend to give the combat a feeling reminiscent of the fluid firefights of the best first-person shooters with a hint of the first-person melee combat from classic first person-fighting games. Cradle offers a dynamic and responsive game where you forge your own path.

Aderyn's Cradle’s Realfight Combat System is a new way to fight, bringing you an unprecedented level of dynamic control.

Where you aim to attack on your opponent determines what attack your character does. In real sword or melee combat, certain attacks make sense for certain places on an opponents body, while others don't. If you aim at the head of an opponent with a sword in Cradle, you are given only the attack options that would make sense for striking at someones head with a sword. The same goes for arms, legs, the left and right torso, or any area other area you care to aim. Because these choices vary by weapon, but are the same from enemy to enemy, this system is easy to learn and intuitive to use. Simply by aiming and clicking the left or right mouse button, you are able to choose in real time where and how you will strike.

Where you last struck has an effect on how your next attack will play out. In real sword and melee combat, some strikes flow from one to the next, rather than returning to guard between attacks. We wanted to capture this flow from one blow to the next in our Realfight Combat. In Cradle, if you have a sword and want to do a slash right at the torso of an opponent, followed directly by a slash left, simply aim at the right torso and click the right mouse button, then aim at the left torso and click the left mouse button. The result is a continuous slash to the right and back from the left. This system adds fluidity and responsiveness to our combat.

Weapons and Weapon Weight: Weapons in Cradle are designed with specific strengths and weaknesses in combat, and each unique to their specific character class. Not all weapons are created equal, and not all attacks can be blocked. A heavy mace couldn't be blocked by a small dagger, and a hit from a short sword would hardly be noticed when blocked by a heavy or large shield. The weight and type of weapon being blocked, as well as weight of the weapon or shield doing the blocking determines how much or little the player blocking or being blocked will be affected. When should I block, and when should I dodge? In Aderyn’s Cradle this is a real decision.

When within a certain distance of an opponent, swinging with your weapon becomes unfeasible, not to mention it becomes impossible to accurately aim. This is where proximity determinism comes in. When too close to an opponent to swing their weapon, instead of their normal attack, the player will push off of their opponent and create space so as to become effective again with their weapons. These maneuvers vary in type and effect depending on where the player is aiming and what weapon they have equipped.

Player movement is one of our primary focusses; puzzles, exploration, and combat all depend on the way you move through the world. After researching player movement across many genres and platforms of games, we have implemented a novel mechanic that provides for an unprecedented degree of full circular motion and control with only the arrow keys. Aderyn's Cradle utilizes the standard W, S, A, and D keys already used by most PC games for directional movement, but the movement is both fluid and nonlinear. As a result, the four keys will give you multi directional control usually found in control sticks on game pads. During testing our team really dug the movement system. We hope to provide you with the chance to demo it in the very near future.