Aderyn's Cradle tells the story of a conflict between nature, man, and the gods. The games main quest tells your story, as you journey to Aderyn's Cradle, in hope of re-uniting Aderyn's lands with Anora, bringing balance to the world.

Long ago, the Great One, Anora, molded the land. As the ancient one worked, they saw to it that the land was full of all kinds of creatures, from the tiniest organism to monstrous beasts that roam the plains. Unable to rest without perfection, the great Anora poured their energy and spirit into every last speck of dust, until the Great One was no more, leaving only the land of Anora and its five splintered pieces of the whole.
These splinters, each known as a Cradle, were each left in control of one of five gods; Acie, the god of eyes, Nitima, the god of heart, Ostia, the god of mouth, Ryphae, the god of mind, and Aderyn, the god of hand. These five, once whole, awoke with a distant memory of what had been and in turned focused on their new found power.
Distancing themselves from their siblings, the five settled in at their Cradles, fashioning their follower’s societies that only satisfied their own selfish pleasures, except for Aderyn. Aderyn the Maker was the most inclined to creation, passing on this gift to his many followers. Unlike the others, Aderyn took pleasure in watching the humans build; much like Anora did, and was proud of the monuments and great works his followers built. To inspire such creativity, Aderyn lit the soul fires, flames in his temples that gave men freedom and will to create, which lead to Aderyn’s followers being known as master craftsmen. With the fires light gleaming over Anora, many began to flock to Aderyn’s Cradle, drawn by his encouragement to forge their own destiny, as long as it was done with their own two hands. With his influence gaining, Aderyn’s followers began to carry his charm, a round and bright jewel that signified Aderyn guiding their path.
As Aderyn drew in more and more followers, the other four gods watched, seething with jealousy as Aderyn continued to display caring and passion where his siblings showed only cruelty and wrath. And so came the Soul fire Crisis, an event which changed Anora forever. With his time running out, Aderyn acted swiftly, splitting his very essence into five pieces. He gave four to four his four high priests, making them immune to the horrid magic that the other gods would use to twist and destroy Aderyn’s other followers and the land itself. With the four almost upon them, Aderyn hid his last essence in a small shrine located on the borderline of his Cradle. With preparations complete, Aderyn and his followers faced their impending doom.
The battle was fought hard by both sides, but in the end Aderyn’s loyal people lay beaten and broken across Aderyn’s Cradle. Showing no mercy, the four divided Aderyn’s Cradle, one piece for each, warping and twisting it into an aberration of its former beauty, altering its inhabitants into monsters, corrupting the soul fires, and destroying all the work created by Aderyn’s followers. To ensure Aderyn’s defeat, the four trapped him in the great citadel, located at the heart of his land, and together banished Aderyn’s Cradle to another plane of existence, leaving a gaping hole in Anora, a reminded to those who may defy the gods. Aderyn’s four priests, the only intact survivors, now wait endless in Aderyn’s Cradle, praying for the return of their god. 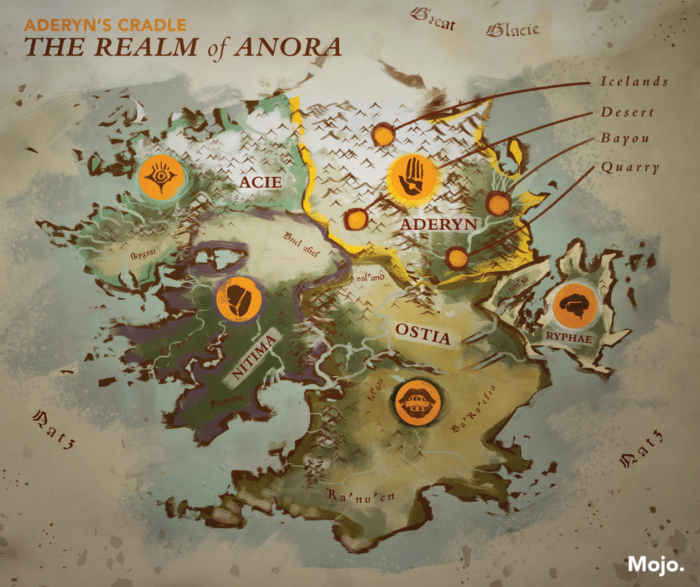 A map of Anora after the Great One created it.
Retrieved from "https://aderynscradle.fandom.com/wiki/Lore?oldid=1344"
Category: