Perfect Thunder is a legendary Aderian longbow, it is one of six legendary weapon you can get as the Ranger class in Aderyn's Cradle. 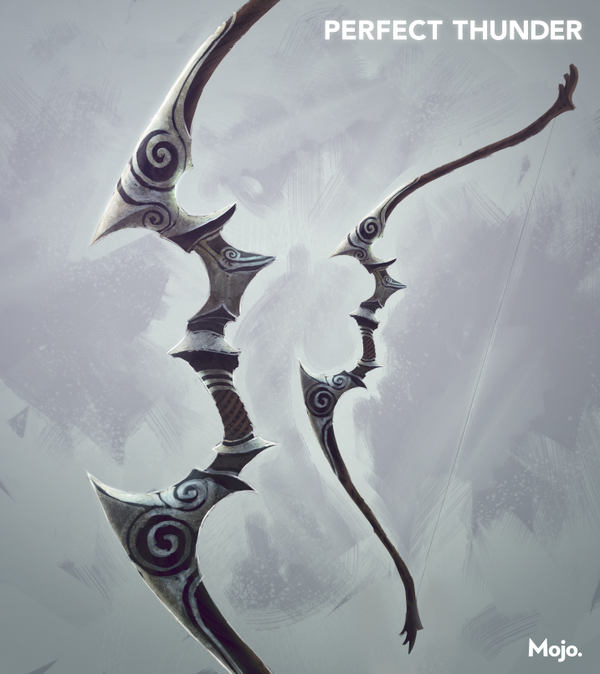 Perfect Thunder, After being imbued with power from Aderyn.

There was once a hunter of exotic beasts who was known for three things: his huntsmanship, his drinking, and his gambling. He was excellent at the first, fair at the second, and wretched at the third; he eventually had to sell his cows, his ancestral lands, and his home to accommodate for his vice. All the while, his beloved daughter grew tired of watching her birthrights be sold inch by inch, and her once-esteemed father degrade himself. She gave up her position as heir and struck out on her own, saying she would seek her own fortune since her father had now wasted the one left by their ancestors. This finally roused the huntsman enough to stop drinking himself to sleep night after night. It took years, but he cleaned his body and mind, and purged his life of gambling. Nonetheless, his ledger and reputation remained stained. He only had his skill as a hunter left to him, and no creature he could fathom would fetch a price that could rid him of his debt. He would end up killing dozens, if not hundreds of fearsome creatures, threatening an entire ecosystem, and still come up short on his sums. But, one of his few remaining friends, a librarian, told him of a forest where creatures made of stone laid jeweled eggs, a single one worth twice what he owed! Sadly, the friend informed him, there was no way to kill the creatures; the eggs could only be acquired during storms, when the thunder would cause even these invincible beasts to cower. The Hunter gazed forlornly at the clear, open skies. The wet season was still months away, and debt collectors are not known for their patience.
He pored over ancient tomes for a few weeks, and there discovered a solution. A legend told of a secluded glade where thunder clapped each time a stiff wind blew. The sound was the work of a tree. He was able to travel, under guard, to find this legendary tree, so that he could craft a fine longbow from its wood. To himself and his company, it sounded like the end of the world when he felled a single branch from it. He then made fine arrows for this magnificent bow, with glittering multi-faceted crystal arrowheads that reflected the light in a dazzling display. By the end of his work, it even sported a coat of sparkling paint. It seemed to the company that he held a fork of lightning in his very hand.
Each arrow, when the bow was fully drawn, rang loud as thunder when let loose. The crystal arrowheads flashed, blindingly bright, as if he were truly throwing lightning. Though his creditors were impressed with his craftsmanship, they reminded him that their purses grew no heavier. Thus armed, he headed to the forest where the stone beasts dwelt, on the clearest, brightest day of the dry season. He found a beast and its nest, and bade his handlers give him space. He climbed a tree, settled in, and loosed a dozen arrows. The ancient beasts quaked and covered their heads, paralyzed with fear. The arrows bounced off them harmlessly, but his company, there to make sure he did not leave with his debts unpaid, were able to rush in and steal an entire clutch of eggs.
His lands restored, his fields replanted, and his reputation augmented, the proud hunter believed he would be able to enjoy life again, especially with the wealth he now enjoyed. But he was an old man at this point, and it all meant very little to him now that his daughter was gone. His house was no longer a home; she had imbued it with life and warmth, like a small soulfire, until he had driven her away. His daughter proved the one quarry that could elude him, producing false trails and seemingly always one step ahead of him. Though he was desperate to reunite with her, he was proud of her skill and resourcefulness. Only a skilled huntress could evade him so well, so skilled indeed must she have grown over the years… Apart from him. In his heart, though, he wanted for her return to his life far more than he wanted to appreciate her successes from afar. When he finally grew weary of his hunt, he came to Aderyn for a solution. Aderyn admired the daughter’s free-spiritedness and resourcefulness far too much to deliver her to her father. Instead, he made a pact with the hunter; a man who had also proven his worth to the eyes of the god. In exchange for becoming an agent of Aderyn, the hunter was granted a long life of service.
When lightning struck on a clear day, it meant the hunter was near, and Aderyn’s foes were afraid. Once the hunter arrived at the last of his glittering arrows, and the crystals began to disappear from the land, Aderyn anointed the weapon. He crystallized the bow’s unique lightning design, imbuing it with added strength. Seeing this, the Hunter rejoiced, but saw his quiver was still empty. As he drew it, he found it had gained the ability to loose arrows of true light, which nocked themselves whenever the bow was drawn and flew straighter than any crafted by humans.
Thunder rolled throughout the land wherever he drew his magnificent weapon, striking fear into the hearts of all who opposed himself or his god. By the time he was laid to rest, the bow known as a relic of Aderyn’s craftsmanship, and the skill of the human who wielded it. Though his legacy proved richer than his wildest dreams in life, his long service to the god did not reunite him with his daughter, who quickly learned to depart wherever she lived at the first sound of thunder.